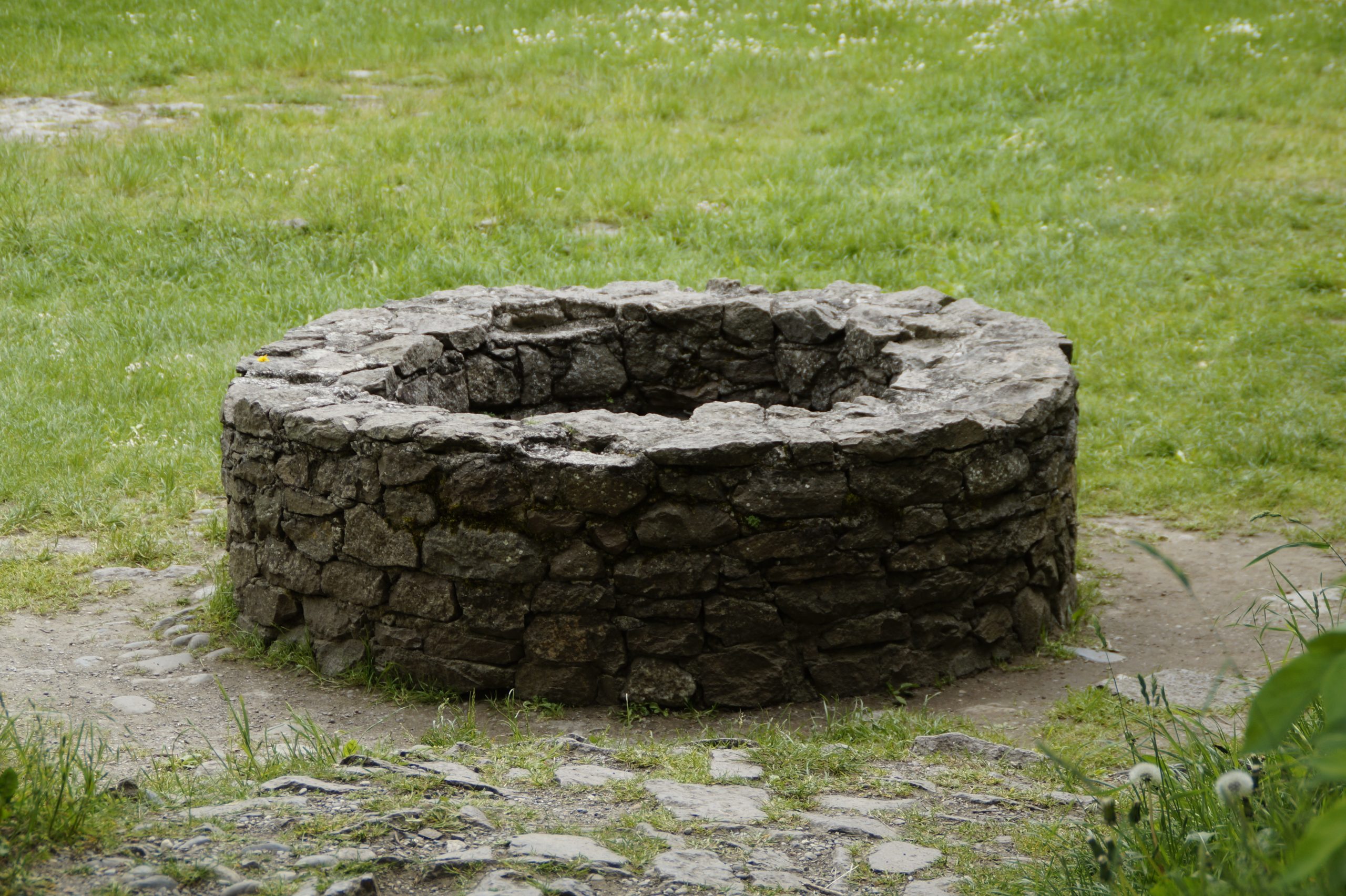 She walks the long hot road on an equally long and hot day. Her feet are sore, but not as wounded as her reputation. Five husbands. Five people she has given both body and soul to. She has loved, but never been loved in return. Oh, they all said they loved her, but when push came to shove she was doing all of the giving and they gave nothing but grief in return. The one she lived with now refused to marry her. With tears in her eyes she realized that he didn’t love her either. If he did, he would be more than willing to be her husband. And then, there were her friends.

They called themselves friends. They came to her when they needed a favor but the second her back was turned the gossip began. Why she hadn’t given up on people long ago was a mystery to her. Her heart burned with anger just thinking about the way she had been treated. Her soul yearned for someone she could trust or some refuge where she could turn to in troubled times. Yeah, right. Like she deserved that. She was the first to admit that she had ruined her life. It was a bit unfair the way she was treated, but maybe someday…

That was when she saw him and stopped dead in her tracks. Leaning against the well up ahead. A Jew. A member of the group most likely to condemn her. She thinks for a moment about turning back. Haughtiness is the last thing she needs and it isn’t worth it to continue only to be insulted. There was something inviting about the man though. She wasn’t sure what. His manner was peaceful. “I’ve got nothing else to lose.” She mutters as she approaches the well and the man beside it.

As she makes eye contact with the man she braces herself for what he might say and what he might think. Then he does the last thing she would ever expect a Jew to do in her presence. He smiled at her. Nobody ever smiled at her. Not even her lover. He gave her a look of pity and disgust half the time. But this man… Hadn’t he heard? Did he not know what kind of woman people thought she was? Was he unaware of the rumors?

As if sensing her thoughts the man’s smile turned to a grin. His eyes twinkled. “I know.” They seemed to say. “But I don’t care.” Can I trust him? The woman thought. There was only one way to find out what his intentions were, and that was to do the unthinkable. Talk to him.

Right off she knew there was something different about him. She could tell after only a few words that not only could she trust him, but that she could talk to him about anything. He seemed to talk in riddles, but what he said was very valuable. He offered her life like she had never known it before. Who is this man? And why would he see something valuable in her? For once she had met someone who wouldn’t let her down. And then he did.

“Go and get your husband.” Such a sore subject. She hung her head before muttering that she had no husband. The man saw a tear in her eye and placed a hand on her shoulder.

“True, you have had five husbands, all of which are gone now. The man you live with now doesn’t love you. You’ve worried about it for a long time, and after that fight this morning, you know it isn’t love. It hurts. I know.” Jesus took two fingers and lifted her chin so she could look into his eyes.

Looking into his eyes, the woman saw something. She saw the same thing everyone else had seen in his eyes. She saw not just love and compassion; she saw the love of God. Impulse told her to run. A broken life told her to stay. The words she caught herself saying next were odd. They came, not from her mind, but from the wounded heart that had been hurt so many times. “You’re a prophet. I have just one question for you.” Jesus nodded, urging her to continue.

“My people have always worshiped God from this mountain. Your people say that God must be worshiped in Jerusalem. I want to be close to God. Can you tell me how?” The Samaritan woman had no other hope, and was at that point willing to do all she could to be closer to God. Oh if only she knew just how close she actually was to God at that moment.

Jesus responded to her with compassion in his voice, “The time has come when it no longer matters. Very soon your people will be able to worship not in this geographic location or another, but in spirit and in Truth.”

“Sir… I know that one day the Messiah is coming. Will he help us sort all of this out?”

Jesus’ eyes brightened, as did his smile. He admired the woman’s longing to be near to God. He had crossed the paths of many hardened hearts. This woman had every reason to have a hardened heart; it had certainly been broken enough times. Despite all that had happened in her life, she was willing to listen, willing to learn. In her spirit was the formula for eternal life, and she was standing only inches away from the key. “I am He,” was all that Jesus said.

“Come again?” The woman may have asked before processing the thought.

Jesus just smiled and nodded. He knew she had heard him the first time.

This was not possible. This man claimed to be more than a prophet, he was claiming to be the Messiah. The woman had been taught that the Messiah would be God’s redemption and if this man who knew her life story and still accepted her… If this man was who he said he was, then… God cared… For her… For the first time in years the woman’s face glowed. She now had a hope, all of her “Maybe somedays…” Had vanished, she had just received everything she ever needed.

Without another word she ran into the town to tell her neighbors, whether they wanted to hear it or not. Thank you wasn’t necessary. Jesus had read her heart and knew that she would always be forever grateful. In the town the woman came to everyone she saw, “Come see the man who told me everything I ever did, and still accepts me. I think he may be the Christ.” And they came, and they believed, not just because of the woman’s testimony, but because Jesus healed their wounds just as He did hers.

Have you ever been there? Your plans have failed, you’ve been let down, a countless number of heartaches have troubled your soul and wrecked your life, and you don’t see any way out. Has the phrase “Maybe someday” become your Mantra? Fingers point, eyes stare, and rumors fly. Your reputation has been scarred and there is no way to get away from the harshness of others. Have you felt alone? An outcast. A lone madman on an impossible journey. Take heart. Jesus stands at the well beckoning you to try the water of life. The Samaritan woman got a taste of it and she was forever changed. She went from having nothing, to gaining everything.

I’m not sure about anyone else, but when I get to Heaven, this is one of the first people I want to talk to. There will always be time to talk to Moses and Joshua and Great Aunt Tillie, but first I want to get to know this mysterious nameless woman from Samaria. Of all the people in the Bible, she is the one that interests me most.

We don’t know much about her, the gospels do not go into great detail where she is concerned, but what they do reveal is very powerful. We know that she was an outcast, that she had never really known love, and that she was the talk of the town in a negative way. All of that changed with just one look in the master’s eyes.

I’d also like to talk to her about courage. It’s apparent that she had a lot of it. She had no good reason to go back to the town. She could have followed Jesus wherever he went and it would have been a lot safer. She wouldn’t have to face the people in her city ever again. That wasn’t what she chose to do. She chose to return. She came back from the well with a renewed spirit and a heart of gold. Imagine the courage, to tell people who thought she was the lowest form of human life they had ever seen about the highest form of life they could ever know.

After she trusted Jesus, she went back to the town that slighted her and told everyone about this gift she had been given from the Messiah. The change in the woman’s heart was amazing and instant. She had just tasted eternal life, and after the way she had been treated, she could have kept it all to herself. Instead, she went to people who had snubbed her for years and showed them how to find it. That took courage. It was because of her courage that they went, and they learned, and they too received the water for their thirsty and dehydrated souls. The woman was never an outcast again. She became a pillar of faith, the woman who had so little, but had shown them so much. A tiny light in a world of darkness.

Jesus saw something precious underneath a pile of rubble in her soul, and he illuminated it for all to see. Jesus did the same for everyone. The best news is that He still does it. When life loses its luster and time drags on, go to the well. He waits there with a supply of water that will never run out. When the waves rise above your head and your dreams turn to nightmares, go to the well. It will never run dry. When you are weary and tired of running the race, go to the well. Jesus is there. He knows everything you ever did, and He still loves you.