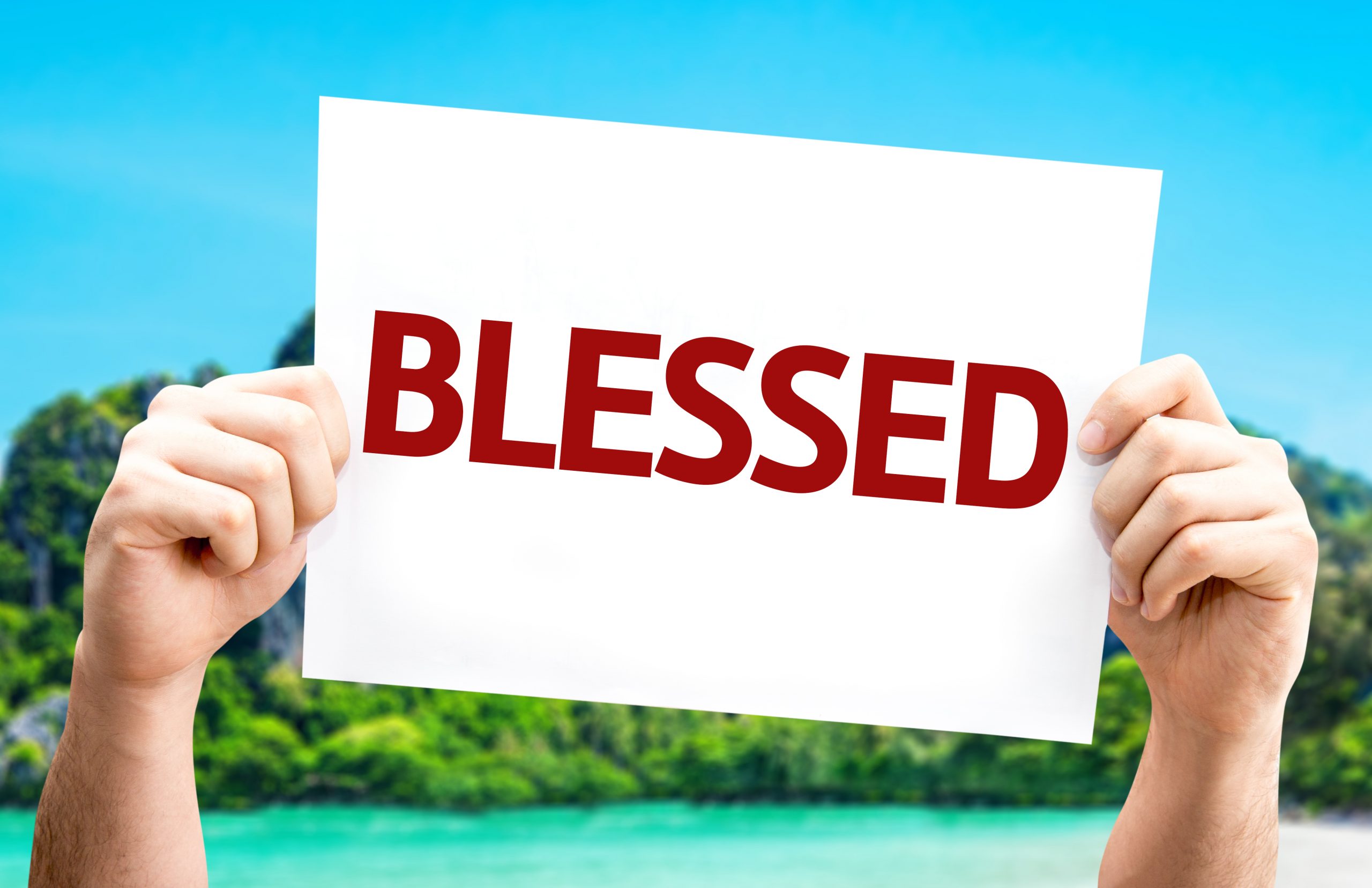 This often-uttered catch phrase echoes through the halls of churches and private schools. It usually means “Let me brag a little bit about my recent accomplishments.” When you hear this, you either have just heard or are about to hear about someone’s new house, new car, wonderful marriage, recent promotion, or sudden acquisition of unexpected funds.

Jesus called people blessed, too, but some of His “blessings” seem more than a little strange in our culture. He lays these out in a part of the Bible commonly called the Beatitudes.

“Blessed are the poor in spirit, for theirs is the Kingdom of Heaven.”
Who are the poor in spirit? In Jesus day, they were the people He spent most of his time with. They were prostitutes, tax collectors and fishermen. They were common, everyday people with mounds of sin heaped high. They were people the religious establishment had rejected. They loved God and wanted to grow closer to Him because they knew they were in need, but they were turned away at every point by the self-righteous.

Today, they are the single mother who has had an abortion, the pregnant teenager, the homosexual, the alcoholic and the man with the tongue ring. They are the ones who sit at the back of the church and don’t talk much. They come because they want to know God, but they don’t feel like they belong.

“Blessed are those who mourn, for they shall be comforted.”
Think about someone who is truly in mourning. Picture a widow who just lost her husband of 50 years. She’s broken. When she closes her eyes she sees his face and when her eyes are open, she can’t control the tears. She is hopeless and miserable and she can’t pull her emotions together. She is not the type anyone would consider “blessed.”

When Jesus talks about mourners, he is likely talking about people who mourn over their sin and over their personal failures. These are the people who are hard on themselves and are unable to forgive themselves. Their self-loathing and blame may be counterproductive, but you cannot ignore their understanding of the depth of their need for Jesus. He promises they will be comforted.

Those who mourn for their sins are the only ones who truly understand how badly they need to be rescued from those sins. Their personal pain, the very failures that keep them awake at night provide the groundwork for the true blessing of loving their God.

“Blessed are the meek, for they shall inherit the earth.”
The meek. The patient, the passive and the peaceful are promised the earth itself. It is not given to the go-getters, the name-droppers or those who call undue attention to themselves. Ironically, Jesus calls a group of people blessed who would never dare to boast about their blessings.

“Blessed are the merciful, for they shall be shown mercy.”
The people who give to others and put others before themselves are called blessed. So often, the people who go around claiming “blessings” are the ones who did all they could to take from others, throw others under the bus, and who adopted a “me-first” attitude. That works in this world and has made a great many quite wealthy, but Jesus says true riches are given to those who show mercy.

“Blessed are the pure in heart, for they shall see God.”
Pure in heart here is more than just a moral purity. This one is about motives. People who give so they can boast or make a name for themselves don’t give from a pure heart. The pure in heart are those who do good, not with an ulterior motive or because it gives them something to boast in, but those who try to do good works out of a genuine love for God. These are the people who come to God with broken hearts to be purified, not the ones who come to him with arrogant pride and feel that God somehow owes them for their goodness.

“Blessed are the peacemakers, for they shall be called sons of God.”
In a world where getting what you want often means backbiting, office politics and all out war, those who are called blessed are the ones who strive to avoid conflict and who try to compromise. Creating conflict can get you power, property, money and success, but it doesn’t resemble God. Those who resemble God are those who seek to resolve conflict rather than perpetuate it. Once more, we see that the ways of the world are not the ways of God. The peacemakers are called blessed, but they are often walked on.

“Blessed are those who are persecuted for righteousness’ sake, for theirs is the Kingdom of Heaven.”
Persecution is not something the average person would consider a blessing. When we count our blessings, we don’t typically include this on the list. Persecution in this sense though means to be persecuted because of your relationship to Christ. To be persecuted for this reason shows evidence of a life focused on God. Such a life is considered to be blessed. The shift in thinking here is profound: those who are persecuted are powerless. It is the powerless and not those in power who are given the Kingdom of Heaven.

“Blessed are you when others revile you and persecute you and utter all kinds of evil against you falsely on my account. Rejoice and be glad for your reward is great in Heaven.”
The unpopular and hated are blessed. Those who stand for what they believe in and are not blown by the winds and moods of the masses are called blessed. Those who choose the long and hard road instead of the easy ride are considered better off.

Why are all these groups of people we would consider nobodies called “blessed?” Because God is a long-term God. He is the God of the Big Picture. We may feel blessed in the short-term when we are comfortable, but we find ourselves more dependent on God and closer to Him when we face discomfort.