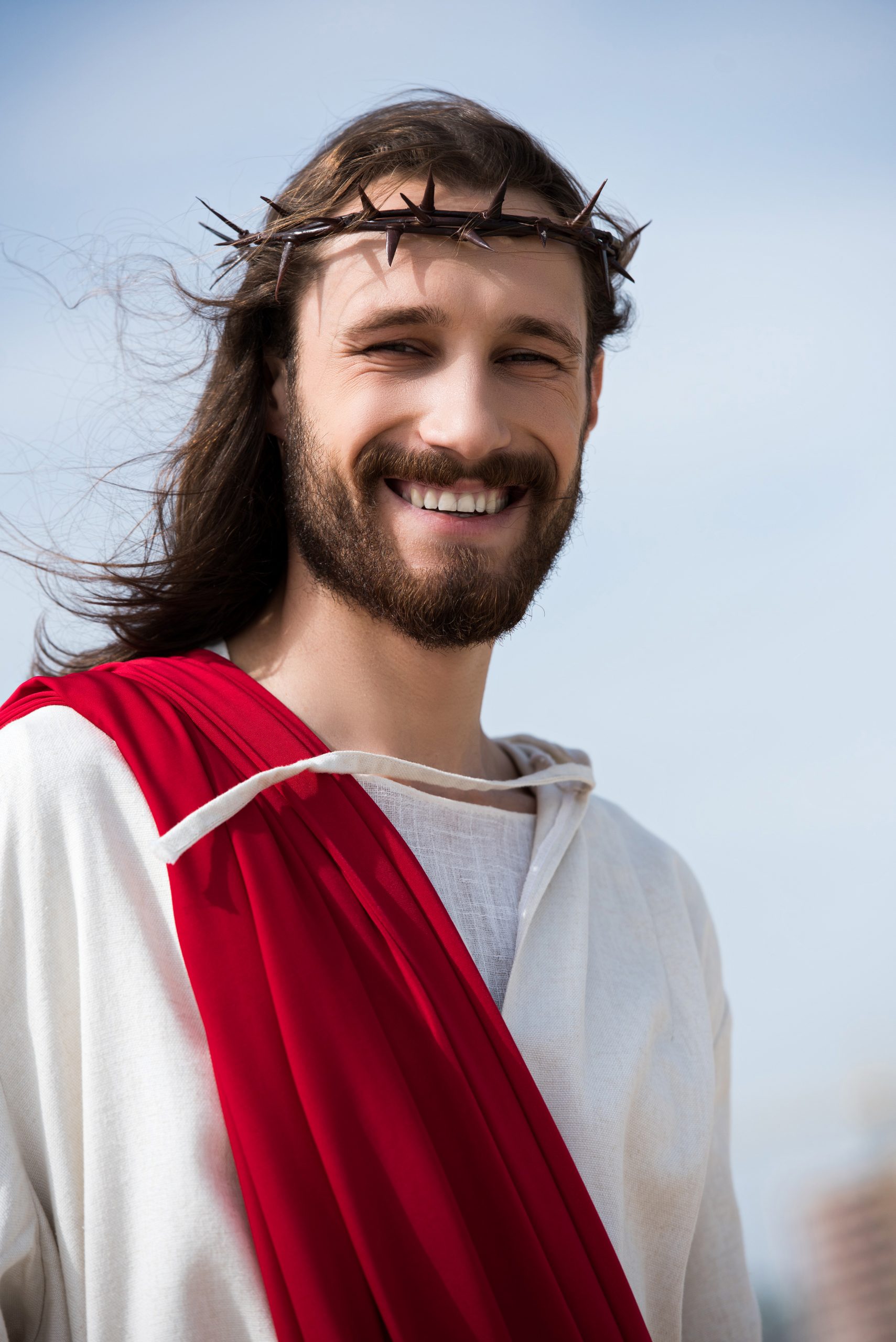 “What the heck is this? Jesus… Smiling? Every picture I’ve seen of him shows him either in pain, crying, grim, or sorrowful…”

And that’s exactly the problem.

He was human. He felt the same feelings that you and I feel. Yes, he was sorrowful at times, he did get hurt, and he did cry. But, that wasn’t all he did. He did a lot more than just go to Lazarus’ funeral. He also smiled, and laughed, and joked. He experienced joy and all of the good things in life. He went to a wedding too, you know.

“Yeah, right… What did Jesus have to be joyful about? He came here to die.”

Well, think about it. From the beginning man was intended to be in fellowship with God. God wanted to spend time with us, to talk to us, to be our maker and our friend… But we chose to sin and to separate ourselves from God.

No kidding. Anyway, for centuries God longed to have communion with us and to walk with us, talk with us, and help us out when we were down on our luck. Because of sin, he couldn’t do that. So, he became a man. He became one of us, so that he could get to know us and understand us better. He came in a form that we could understand so that he could show us how to have eternal fellowship with him, and to be the way we were always meant to be. Then, he made a new way for us to get rid of our sins.

“Right. And that was painful, and sorrowful… Where does joy come in?”

Imagine Jesus as a child. Playing games with the other children. Whether he knew who he was at the time or not, this is something he had never gotten a chance to do. For years he had to watch the children playing from above, and he could never interact with them. Finally, after all this time, he had the chance to. Wouldn’t that make him smile? Wouldn’t he be having fun?

“Yeah, I guess. I mean, he created them and then he had to be apart from them…”

Right. Now you’re catching on. And when he started teaching, think of how it made him feel when he saw the lights go on in people’s heads? Wouldn’t it fill him with joy to see them finally understanding a message that he could not tell them from so far away?

And he actually got to spend time with people as their friends. He ate dinner with them, made idle chit-chat, and he got a chance to be with them one on one. Imagine the joy he must have felt, getting to do all of this after so many years of being so far away from us.

“Wow. I had never thought about that before…

So… Do you see why Jesus is smiling in that picture?

Kind of changes your view of him doesn’t it? Seeing him as a joyful and happy person sure does beat the typical sad, somber servant with a death wish, doesn’t it?

Kind of makes him seem more inviting, doesn’t it? It makes you want to get to know him a little more, doesn’t it?

“Well, I always wanted to find the Jesus I never knew.”